Straits Forum: Drinking the Same Bottle of Wine, We Belong to the Same Root

XIAMEN, CHINA - Media OutReach - 18 July 2022 - On July 13, 2022, the 14th Straits Forum was held in Xiamen, Fujian. “Drinking the same bottle of wine, people from both sides of the Straits belong to the same root.” That was said by Yang Cheng-wu, Magistrate of Kinmen County when he addressed the Form before. Now it is quoted again at the Forum this year. The quotation best expresses the purpose of the Forum to promote people-to-people exchanges across the Straits.


Full of young people, the Forum also causes homesickness. The spectacles here remind Taiwanese singer Nini Wei of the hustle and bustle of the alley where she used to live with her grandmother. The performance of waving flag-tied bamboo poles originated in Fujian, where the roots of most Taiwanese lie.

Forum is focused on folk culture and future development. In addition to youth exchanges, the Forum has been valuing cultural and economic exchanges by holding events about agriculture, folk culture, and religions for the past 13 years. It also has been trying hard to meet the needs of the Taiwanese for development opportunities.

The dancing program Tea Fragrance poetically shows the beauty of the Cherry Blossom Tea Garden in Yongfu Town. As the hub of the National Taiwan Farmers Pioneer Park, Yongfu Town is where most Taiwanese farmers invest, and the mainland’s largest producer of Ruan Zhi Oolong Tea. Drinking tea brings together people from both sides of the Straits, and a growing number of Taiwanese farmers are now choosing to work in Yongfu Town.

The Forum is full of affectionate stories and best wishes. There will be a nostalgia program called “35 Years of Affectionate Stories”. In the program, stories about people who have helped promote cross-Straits exchanges will be shared. Many young people from Taiwan have been inspired to engage themselves in the rural revitalization drive of the mainland. Li Peizhen, a Taiwanese folk culture artist restores North-Song houses and runs a folk culture museum in Qingqiao Village, Haicang District, Xiamen.

The Forum witnesses frankness as well as perseverance. Taiwanese man Yang Mingzhong once promised to cycle together with orphans to the mainland to see the Yellow River. He wanted to prove to the orphans that the Yellow River is not yellow. He has been cycling so for 10 years.

Over the past decade, he has cycled 12,000km through 50 cities . Along the way, he has helped 920 young people of both Taiwan and the mainland.

Like many Taiwanese attendees here, Yang Minzhong greatly values the friendship between the youth of both sides of the Straits. 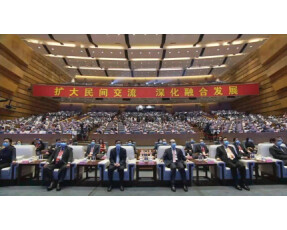