Bitcoin and Ethereum have long since ceased to be the only games in town for crypto investing and trading. New players have emerged that, in comparison, are still in their infancy while having unheard of potential to be positively disruptive—both for newcomers and seasoned traders. Here we take a look at some of the projects.

KUALA LUMPUR, MALAYSIA - Media OutReach - 26 April 2022 - The world's first cryptocurrency––bitcoin––has been around for more than a decade. In 2015, Ethereum entered the blockchain innovation scene as the first smart contract platform. Over the years, both cryptocurrencies have gained widespread recognition and support. The main reasons were its novel premise for true decentralisation and corruption-proof technology—contributing to the rise of individual financial sovereignty unattainable before. Exhilarating adoption is also true for the trading community. The annual trading volume of Bitcoin (BTC) and Ethereum (ETH) consistently rise.


It's now not only a list of significant commercial companies (like Twitter, Tesla, Etsy, Microsoft, or Paypal) that adopt cryptocurrencies. Entire countries—for example, El Salvador in 2021—are switching to crypto, declaring bitcoin their legal tender alongside the centralised national currency. Some governments do it sooner, while others will postpone this decision as long as possible. But that's a topic for another occasion.

The entire blockchain industry is built and developed around bitcoin and Ethereum. So, these two cryptocurrency monoliths would never leave the sphere anytime soon. But there are new blockchain projects launched every year that solve issues inaccessible to the big players. Much smaller by market capitalisation, these cryptocurrencies are still in their infancy and have great potential for further growth and market share expansion. Investing in them and trading them can prove decisive while steering the often confusing Foreign Exchange waters.

Lately, the international Forex broker OctaFX has upgraded its trading pool by adding 25 new promising cryptocurrencies. Let's take a look at a few of them.

Cardano (ADA)
A direct Ethereum competitor among smart-contract platforms. Its founder participated in developing the Ethereum network and, since 2015, founded Cardano as a separate entity. Since 2019, its cryptocurrency ADA has put on an incredible expansion. Its ecosystem is considered one of the most decentralised—having an exceptionally high and rare level of self-initiative among its global community. Most of them do not simply hold Cardano's native cryptocurrency but have found pools with liquidity and the ecosystem, in turn, grows stronger every week.

Solana (SOL)
Another 'Ethereum killer', as some like to claim in the crypto community. In fact, it doesn't so much kill it as challenge some of ETH's dominant market share. Like Cardano, Solana solves scalability and transaction fees problems that have caused much pain for Ethereum users. Last year has provided Solana with one of the biggest success stories of growth and community building.

Binance Coin (BTB)
This is the native token of the largest centralised crypto exchange on the market—Binance. They have also launched their own blockchain to compete with Ethereum's financial and computing ecosystem with an upwards trend. Binance is one huge success story with just one undeveloped aspect—decentralisation. But beyond that, the company has done a great job of providing an exquisite and reliable user experience. Transaction costs compared to Ethereum and most other competitors are virtually nonexistent.

Matic (MATIC/POLYGON)
Matic is a so-called 'second-layer solution' for Ethereum. That means it's set out to solve a specific problem: Ethereum's severe scalability restrictions 'on-chain'. There have been others, but Matic did a great job back in 2019–2020, bringing together powerful partnerships, building collaborations, and assembling a loyal and committed community ahead of time, resulting in rapid growth in adoption and market capitalisation in the first quarter of 2021.

Zcash (ZEC)
With an uncertain future for classical fiat currencies and monetary policies worldwide becoming more obscure and unpredictable, privacy coins are in constantly high demand. It was one of the most powerful promises of bitcoin itself, back in 2009—financial privacy in a digital age. Since then, much has changed. Bitcoin proved to be less private and untraceable than some expected it to be. After 2014, coins like Monero, Dash, and Zcash entered the playground. Zcash has great bitcoin-based technology and a magnificent team that stands for what it believes in.

Decentraland (MANA)
Decentraland is an Ethereum-based platform that builds a 'virtual reality'. Here you can buy digital land, engage in it, manoeuvre it with other users, and benefit from all processes. Thus, MANA could be one of the key players in the much-talked-about 'metaverse rush', which could prove lucrative in the long run.

An investment opportunity of a lifetime

That is just a small part of the cryptocurrencies worth talking about. A vibrant, new industry is now unfolding that will determine the fate of the 'Fourth Industrial Revolution' and the whole new world that 'Web 3.0' will soon prepare for us.

Any powerful smart-contract players are severe contenders for significant future market share. Ethereum will not vanish, but its challengers will probably seize the opportunities for large-scale growth. It's true for both their governance tokens and their cryptocurrencies.

Investment-wise, privacy coins with powerful code and inventive protocols are almost a no-brainer. Their straightforward use-case will soon be in such desperate demand—especially with inflation being on the loose long term—that investing in them now will print much wealth for those who dare. Their relative worth will skyrocket compared to today's prices.

According to many, a virtual, parallel reality called 'metaverse' is no fringe gamer's dream anymore. There is already a vast virtual marketplace manifesting that vividly mimics the real world. So much so that trade, business, administrative procedures, and entertainment will have a strong substitute domain. It's no niche for some futurologists anymore. Metaverse projects will thrive, no matter what.

In conclusion, these new financial instruments are noteworthy. Behind them are entities that are what Amazon, Apple, Google, or Facebook were to the IT industry just a few decades ago.

OctaFX is a global broker providing online trading services worldwide since 2011. It offers everything one needs to reach their investment goals, providing top-notch conditions utilised already by 7.5 million clients globally.

The company is involved in a comprehensive network of charity and humanitarian initiatives, including improvement of educational infrastructure, short-notice relief projects, supporting local communities and small to medium enterprises.

On a side note, OctaFX has also won more than 45 awards since its foundation, including the 2021 'Best Forex Broker Asia' award from Global Banking & Finance Review and 2021 'Best ECN Broker' award by World Finance. 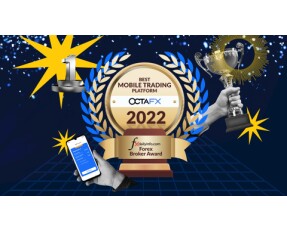 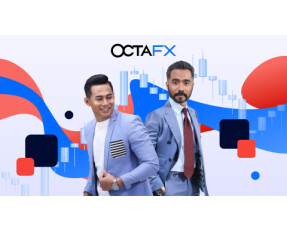 Wak Doyok and Fizo Omar talk about finance together with OctaFX