SHANGHAI, CHINA - Media OutReach - 3 December 2021 - DHL Global Forwarding, the leading international freight specialist division of Deutsche Post DHL Group,  is the first international forwarder to launch a two-way rail freight service between Kunming, China and Vientiane, Laos, via the newly opened China-Laos railway. The rail service is first-of-its-kind in the market, shortening transit time between Kunming and Vientiane from two days via road to about  20 – 24 hours. 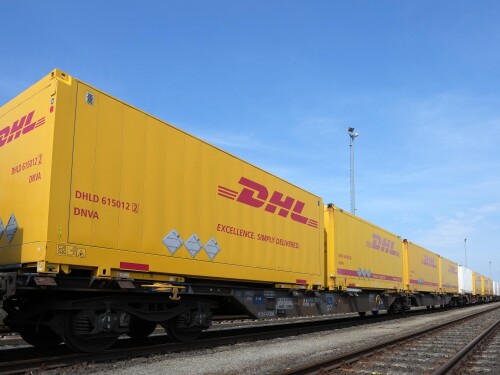 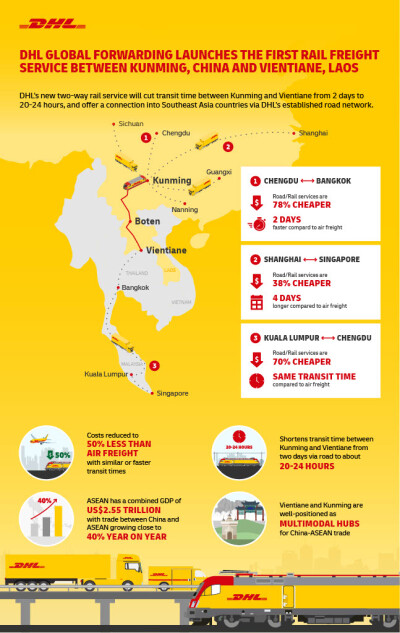 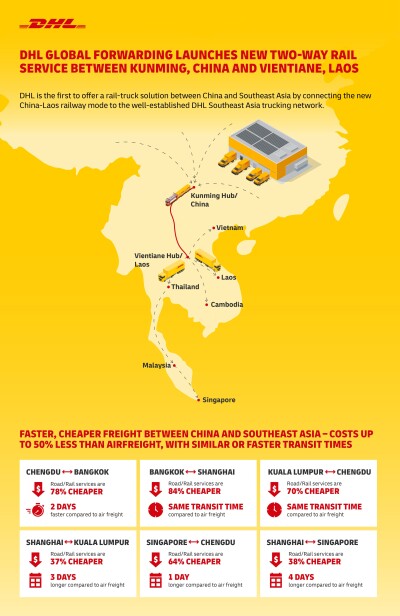 "The China-Laos Railway is a historic moment for the region. It strategically places Kunming as a hub for the Indochina market as the gateway to ASEAN economies," said Steve Huang, CEO, DHL Global Forwarding Greater China. "ASEAN has a combined GDP of US$2.55 trillion and is predicted to be the fourth largest single market in the world by 2030. We see a very bright future for trade and economic activity in the region, which will translate to increased demand for logistics."

"China is ASEAN's largest trading partner, growing close to 40% year on year. The new rail service connecting China and Laos will transform Laos from a land-locked country to a land-linked hub, creating closer trade linkages between Laos and China, and to all economies in the Belt and Road Initiative (BRI), including ASEAN. Businesses moving goods between China and ASEAN countries now have a strong viable alternative between air and ocean freight, and can tap further into DHL's robust road freight and multimodal network in the Southeast Asia region," Thomas Tieber, CEO, DHL Global Forwarding Southeast Asia said.

Peak season relief: Faster, Cheaper freight from China to ASEAN - Costs up to 50% less than airfreight, with similar or faster transit times
Leveraging the new railway, DHL's scheduled service runs in both directions between China and ASEAN markets, including Thailand, Vietnam, Cambodia, Malaysia, Singapore and Indonesia, providing an attractive, highly cost efficient alternative in a time when logistics costs are at an all time high.

The two-way service combines trucking from all over China to the hub in Kunming, running through the China-Laos railroad, then onward with DHL's established road network service  and back, with significant cost savings and competitive transit times, providing a viable transportation alternative. Examples of the services include:

The brand new China-Laos Railway is one of the six international economic corridors under China's Belt and Road Initiative (BRI). The Laos section of the railway is 414-km that connects Kunming (China) to Boten, Laos' northern border with China, to Vientiane in the south, on its border with Thailand. The route will cut the journey time from Vientiane to the Chinese border to less than four hours, compared to 15 hours by road. At Boten, the railway will connect with the BRI network at Kunming, China, through another 595-km railway link, providing Laos with a land link to global and regional supply chains.

Find out more about DHL's road and multimodal logistics offerings, with its road freight services on the rise in Southeast Asia, and a rail freight service from Xi'an in China to Hamburg and Neuss in Germany, that cut transit time down by over 40 percent.  Read more on DHL's Logistics of Things.

DHL – The logistics company for the world

DHL is the leading global brand in the logistics industry. Our DHL divisions offer an unrivalled portfolio of logistics services ranging from national and international parcel delivery, e-commerce shipping and fulfillment solutions, international express, road, air and ocean transport to industrial supply chain management. With about 400,000 employees in more than 220 countries and territories worldwide, DHL connects people and businesses securely and reliably, enabling global sustainable trade flows. With specialized solutions for growth markets and industries including technology, life sciences and healthcare, engineering, manufacturing & energy, auto-mobility and retail, DHL is decisively positioned as "The logistics company for the world".

DHL is part of Deutsche Post DHL Group. The Group generated revenues of more than 66 billion euros in 2020. With sustainable business practices and a commitment to society and the environment, the Group makes a positive contribution to the world. Deutsche Post DHL Group aims to achieve zero-emissions logistics by 2050. 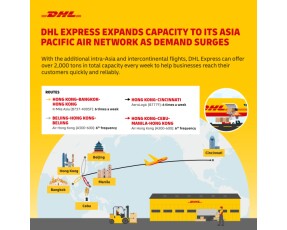