SINGAPORE - Media OutReach - 7 June 2022 - UFC® returns to Singapore with Southeast Asia's first-ever Pay-Per-View event UFC® 275: TEIXEIRA vs PROCHAZKA on June 11 (live in Singapore on June 12) featuring the first UFC championship bouts to take place in the region. This historic event will be UFC's fourth event hosted in Singapore with support from the Singapore Tourism Board.

In the ultra-competitive light heavyweight division, UFC champion Glover Teixeira will make his first title defense since winning the belt with a second-round submission of Jan Blachowicz at UFC 267. Standing across the Octagon® will be first-time title contender Jiri Prochazka who earned his shot with back-to-back KOs of Volkan Oezdemir in his UFC debut and later Dominick Reyes.

2020 FIGHT OF THE YEAR REMATCH

China's first UFC world champion, No. 1 ranked strawweight Zhang Weili, will rematch former UFC world strawweight champion Joanna Jedrzejczyk. This contender's bout in the ultra-competitive strawweight division is a highly anticipated rematch of their first encounter in 2020 that was awarded Fight of the Year.

Additional bouts on the card include:


A thrilling Fight Week of action builds up to the event which includes the start of ROAD TO UFC, the most significant opportunity for Asia's top MMA prospects. ROAD TO UFC is a ground-breaking "win and advance" tournament for 32 mixed martial arts athletes who will compete in four men's weight classes, and each of the four division's winners will be awarded a UFC contract. The opening round will take place across two days during Fight week for UFC 275 in the Octagon at the Singapore Indoor Stadium. The semifinals and finals are scheduled for later this year.


For event updates to UFC® 275: TEXEIRA vs PROCHAZKA, check UFC.com. Tickets are available at Ticketmaster.sg. Check local listings for broadcast. 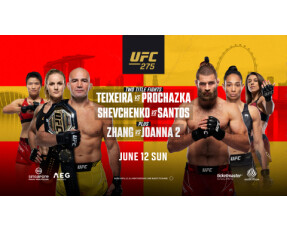 UFC® to Make History in Singapore with UFC® 275: TEIXEIRA vs PROCHAZKA 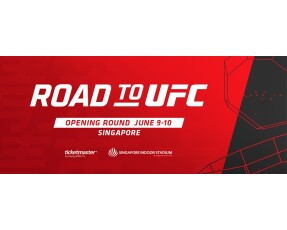