As a leader in the increasingly competitive automotive industry, one of BMW's key marketing objectives is to gain exposure on social media and trend with today's digital-first consumers. With this in mind, BMW Taiwan emphasizes engaging both potential buyers and existing BMW car enthusiasts on social media channels. With more than 600 thousand Facebook followers, BMW Taiwan reached out to more potential BMW enthusiasts and further fostered their loyalty, thus converting them into buyers.

Per Facebook Messenger's policy, fan pages are only allowed to send messages containing promotional content when responding to users who have messaged in the last 24 hours. With the Recurring Notifications that Meta is testing out as a new feature, businesses can send messages to users who agree to receive multiple promotional messages. Appier's BotBonnie was selected as one of the beta testers for this feature in Taiwan and was able to leverage this feature to help BMW Taiwan better engage with its users on Facebook and Messenger.

Bremen Digital Creative conceived the campaign around a cherished Lunar New Year tradition where the first person to burn incense in the temple after midnight is blessed with good luck. Moreover, by leveraging BotBonnie's comment auto reply feature, BMW Taiwan was able to immediately respond to users and create a longer duration of engagement with each of them.

"With the directions pre-discussed with BMW Taiwan, we designed the social campaign for the Lunar New Year holiday, hoping to increase the number of engagements that BMW Taiwan could have for Facebook campaigns. With BotBonnie's expertise in conversational marketing, we not only hit the target but also greatly exceeded expectations in several key results," said Brian Chen, Account Manager at Bremen Digital Creative.

With BotBonnie's exclusive access to the new Recurring Notification feature as a beta tester, BMW Taiwan successfully led users to subscribe to the Recurring Notification, solving the 24-hour window policy restriction and allowing the brand to reach more engagements with the end users. BotBonnie helped BMW Taiwan not only successfully achieve 4X more engagements than during the same period (CNY holiday) in previous years, but also optimize the message read rate to 99%, approximately 10% higher than any other previous marketing campaigns.

"During the whole campaign process, Appier's BotBonnie solution provided our users with 24/7 support. With the conversational marketing solution, we could respond to users immediately and create longer and more engaging journeys. As the next step, with the digitalization trend of marketing, we look forward to further integrating BMW Taiwan's data across different channels and, moreover, to accomplish multi-marketing objectives," said Li Chiang, Digital Marketing Specialist at BMW Taiwan.

"With the Lunar New Year campaign, BMW Taiwan saw a tenfold improvement in customer participation over previous online campaigns, and we can attribute that success to Recurring Notifications, powered by Appier's conversational marketing solution BotBonnie, Meta's authorized partner," says Samuel Chiang, Assistant Manager of Customer Success at Appier. As the campaign continued, the teams noticed an uptick in fan engagement, with increasing numbers of customers wanting to learn more about the BMW brand. "Importantly, in order to broaden the community of BMW fans and potential customers, we implemented Recurring Notifications which helped the company gain 1,500 subscriptions and 2,500+ participants in three days," said Li Chiang, Digital Marketing Specialist at BMW Taiwan.

About BMW Taiwan (Pan German Motors)
BMW is one of the world's leading manufacturers of premium automobiles and motorcycles. As a classic automotive brand which provides sheer driving pleasure, BMW maintains a passion and commitment for creating vehicles that are innovative and environmentally-friendly, cementing its place as an industry leader. Pan German Motors, the importer and dealer of BMW in Taiwan, was established in 1972 and has since built a strong network of dealerships and community of loyal customers through its various marketing efforts. Visit

About Bremen Digital Creative
Bremen Digital Creative is a creative agency with more than 100 Taiwan/International Creative Awards for the past 16 years. We help brands become closer to consumers with social as the core and improve marketing effectiveness through Martech. For fully connected brands, we believe the opportunity for business growth comes from Data-Driven Solution in terms of Social, Creative, Technology and Media. Visit

About Appier
Appier (TSE: 4180) is a software-as-a-service (SaaS) company that uses artificial intelligence (AI) to power business decision-making. Founded in 2012 with a vision of democratizing AI, Appier now has 17 offices across APAC, Europe and the U.S., and is listed on the Tokyo Stock Exchange. Visit 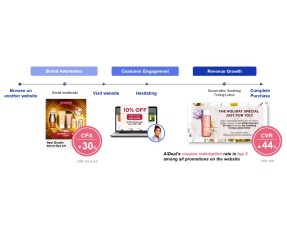